The Best Mouse Trap in Australia for 2020

Mouse Traps can be the best way to control your rodent problem.

However, with so many options on the market, it can be hard to find the product that is right for you.

In this article we break down everything from the type of bait to use to how traps work to help you find the mouse trap that best meets your specific needs. 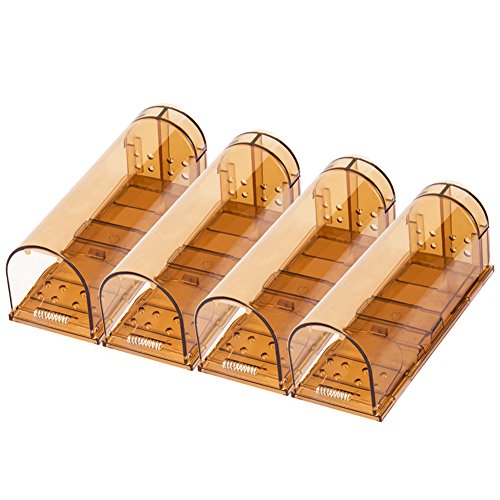 This mouse trap is very effective at keeping mice alive and unharmed. It is all plastic, so there is no chance of the mouse getting caught on metal and injuring itself.

While it is very effective, it is too small to catch a rat – these are strictly for mice. Also, because of the short length, there is a chance that a mouse will get caught in the door by the tail or foot. The door is not lethal though and the mouse is still likely to remain relatively unharmed.

Overall, these are great, humane mouse traps that are reusable as often as you like.

Easy to use
Easy to release mice
No harm to mice

Too small for rats
Mice can get caught in the door 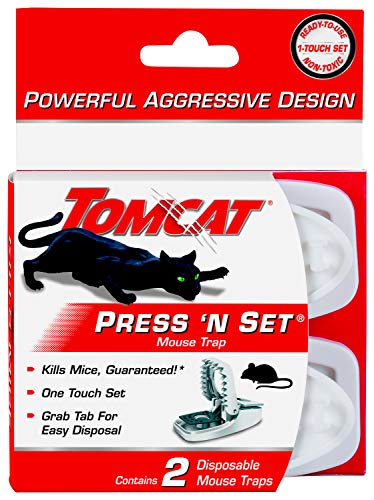 The Tomcat is an instant kill mouse trap. Any small rodents that get caught by this will have their heads crushed before they can react; it’s a fast, painless death.

This isn’t effective on rats, it’s strictly for smaller critters. That said, don’t use it on carpet or anywhere you don’t want a mess. This thing is a beast and when it goes off there may be a lot of blood, so it’s not for people with weak stomachs.

When it catches a mouse, you will know about it. The snapping sound is quite loud. Pick this trap if you want something super reliable and you aren’t squeamish when it comes to blood.

May make a mess
Not for the squeamish

This trap consists of a galvanised iron cage. When the mouse enters, the door slams shut trapping the mouse inside and unharmed. It is very effective and it’s cheaper than electronic traps of similar design.

The mechanism is quite sensitive and easy to set, and it’s good for rats and mice since it has plenty of room. It’s also easy to clean and rust-resistant.

There is some chance that anything you catch may injure itself on the grill. But on the other hand, it is more durable than other catch and release traps.

Durable
Easy to use
Works for both rats and mice

Animals may injure themselves in the cage

This one is a tried and true, spring-loaded snap trap. It instantly kills pests with a powerful jaw that crushes them before they can react.

It’s easy to use and disposal of the dead mouse is simple. But, like other traps of this design, there may be some blood to clean up.

The jaw of the trap is designed for use with mice; rats may be able to escape after being caught because of their larger size. Keep it for small rodents and will serve you well.

Too small for rats
May make a mess

This type of trap is simple and effective.  It is solely for rats though, smaller mice are likely to escape as the jaw won’t grab them properly.

While it is a reliable trap, it may not always kill the rat. It will eliminate most of them, but now and again, a rat may get trapped by its neck and still survive for some time.

The trigger plate is quite sensitive, but sometimes rats may steal the bait without getting caught. To get the best results, place food under the plate, or set it so that the rat has to move it to get the bait.

Overall, this is a simple, inexpensive trap that will work most of the time.

May not kill the rat
Sometimes the bait is stolen


How to Catch a Mouse

Most mouse and rat traps work the same way. You place some bait on the trap and leave it in a place that mice frequent. When a mouse tries to take the bait from the trap, it sets off a spring-loaded mechanism that traps it.

The trap can have a jaw that snaps shut on the mouse, killing it, or it can be a capture device that closes up, trapping the mouse inside, alive and unharmed.

You can also use an electronic mouse trap that has a current running through it. When the mouse steps inside, it gets shocked and killed. There is no blood to clean up with this type.

A glue trap is a board that has glue on it, a mouse will step onto it and get stuck. It doesn’t kill so you may have to finish the mouse yourself, as it will squeak and make a lot of noise.

If you just want to rid yourself of rodents, then a standard trap that kills is probably what you need.

If you are concerned about harming mice, then a catch and release type trap is the way to go.

Just remember that you will have to handle the mouse at some point. Many people can’t stand being around a living mouse, while others don’t want to see a corpse.

What is the best bait for mouse traps?

Believe it or not, cheese is not a very effective bait for trapping mice. They will eat it, but it’s better to use bait that has a strong smell and a similar flavour to what they would normally eat. Peanut butter works well, so do hot dogs and canned pet food.

For electronic or live catch traps, you may prefer to use a liquid bait. Maple syrup works very well because of the strong smell, bacon grease is good too. You can also buy pre-made liquid baits that are designed to lure in mice with pheromones or with an attractive odour.

Where is the best place to set a mouse trap?

The best location for your mouse trap will depend on where the mice are most active. The most likely place your mice will be active is your attic. If possible, have a look around your attic for signs of which part they are spending time in. Things like droppings or chewed wires are a good indication. If mice are more active in other parts of your house try and place the traps close to where you think they are coming in and out of the wall or ceiling. Be careful not to place them anywhere someone (or pets) will stand or put their hand accidentally. The Best Ant Killer In Australia For 2020 Carpet Prices in Australia – What You Get in Different Price Brackets How to Regrout Tile in a Bathroom How To Use Plumbers Tape The Best Mouse Trap in Australia for 2020 The Best Surge Protector In Australia for 2020: Belkin The Best Multimeter for Electricians And DIY The Best Hammer In Australia For 2020